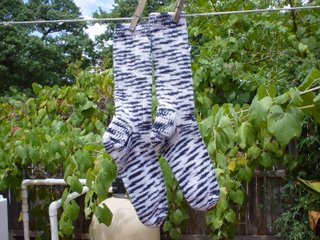 I'm a little burned out with work at the moment. I think it will pass, as it always does. I think it's summer, and wishing that I had the summers free as I did when I was in school. Those long, hot days full of possibility... I have such lovely memories of being outside all day. I think that is probably why I still enjoy the outdoors more than anything else. So far Google has not turned up Lake Plata or what I think was called Hudson Lake, but I have found lots of other information. It seems that the woods I roamed as a kid is still there as a park. I looked at the satellite picture from Google, and in a way it looks the same. The street I used to live on has been plagued by flooding from the overflowing Tinker's Creek.


More crafty goodness this week. The zebra socks are done at last. Shana and I are not in agreement over these. I think animal prints are always in style; she thinks they are an excrescence of the 80's. I did find the socks a bit aggravating in progress. They were knit on size 0 double points & 64 stitches, 4x1 rib. Not a fast knit, and I tore them back three times and changed the needle size and ribbing to avoid some really ugly pooling. The stripey sock monkey only lasted a few hours at the office. Not only did it sell almost instantly, but when Tracey bought it she said that if I'd make up a few more by September 8 she'd put them on her table at a local crafts fair. She liked the whimsical look of this one and thinks they would sell quickly and draw a bit more traffic to her jewelry. I told her we could split the profits if they sold. So now I am in full on sock monkey mode. Not that I have a lot of extra time, as it's still big time bike season. Still, I think I can get half a dozen ready to go without actually losing my mind. I picked up some cute socks at Ross - lavender argyle and some bright ribs that I think will make up nicely in the whimsical mode and I still have three pair of grey and red hiking socks plus one monkey in grey already made up and dressed. I did have to buy a bag of assorted buttons, as my personal button jar is not stocked well enough for the project. I need to hit some estate sales & thrift stores & pick up some buttons. They are surprisingly expensive to buy a few at a time. 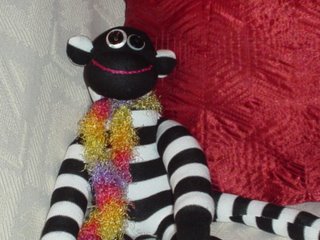 Tomorrow is Spin Your Wheels, where I will do my first 50 mile ride. I've picked up our packets already. The T Shirts are cool, and the goodie bag has some useful stuff. I'll post a picture of the contents with the after ride recap. My bicycle buddy from the office and I have rehashed my situation from last week where I was unable to complete my ride, and we have come to the conclusion that I got my electrolytes depleted. I had started the ride with water only. Usually I start out a long ride with half and half water and Powerade. I will not be making that mistake tomorrow. I think this was a massive thrill for Kevin, who loves to play authority. Since he has more experience than I in endurance rides I think it's a good trade. I have a treasure trove of GU in our favorite flavor, some Enervitene gel in Cola flavor, which Kevin assures me is the good one, and some Clif Shot Blocks, in cran-razz which are sort of like gummy worms for athletes. Each of the products has a slightly different combination of sugars, vitamins, and electrolytes. There will be food and fruit at the rest stops, so I might not use all of my ride snacks. Depends on the temperatures, though. When it's really hot sometimes real food upsets my stomach after the first 20 miles. Tonight I'll check out the bikes and make sure they are good to go. Tomorrow we'll need to leave before 7 am & I know from experience we will not have time for maintenance, except for checking tire pressure.
Posted by Unknown at 3:50 PM