The Wild Woman of Cotuit Road 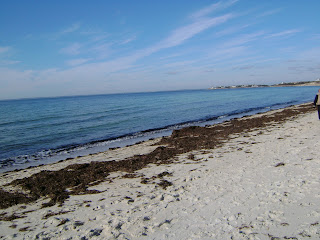 Typical of our status as certified Wild Women we skipped "Amateurs' Night" and did our wild partying at home. Shana watched sports and fell asleep by nine. I stayed up switching between CNN and New Years Rockin' Eve on TV while working on knitting up my Christmas yarn and playing five matches in Words With Friends. I ran upstairs at midnight because I thought the storm door was banging loose, but it was only fireworks and gunfire announcing the New Year. 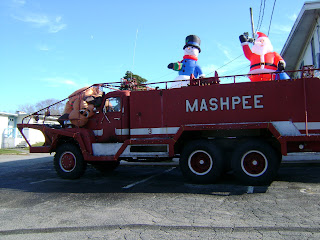 We actually had three days in a row off together, which is a really nice treat. We've done wild things like walking on Old Silver Beach and having breakfast at Cafe Chew in Sandwich. We went to Home Depot in Hyannis for an additional shelving unit to bring in the china and silver from the shed. We went to the Super Stop & Shop in Hyannis to get the makings for our North & South New Years Dinner. I tried to get an inspection sticker for my car but failed because one taillight has a broken tail light lens, a remainder from the hail storm in Oklahoma City last year. We also stopped by the Mashpee Ballet (aka Zachary's Pub, the only strip club on the Cape) to get a picture of their holiday decorations before they are taken down. Rudolph has been standing up until this weekend, but all things considered I guess laying across the hood of the truck is about right.


We sat down last night to start catching up with last season's episodes of Homeland. I checked out one episode out of curiosity and we were both hooked. It's so nice that we can watch all the back episodes and catch up together. Hooray for On Demand!
Posted by Unknown at 12:21 PM

Since you play "Words With Friends" you might like to visit my blog to try my TV trivia anagram game. And happy new year.
Leona

I love on demand and Netflix down load.... LOVE!!

There really is a Mashpee?

I'm catching up as you can tell...