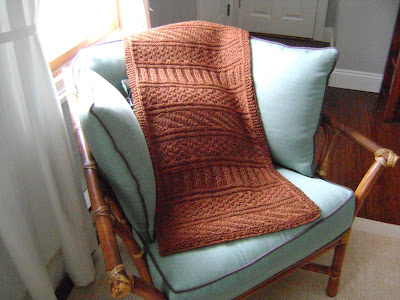 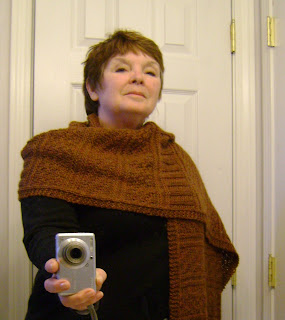 Last night I finished the knitting portion of the Guernsey Wrap that I was working on while I visited my mom in Denver. We just kind of hung out at her house, so I had plenty of quality knitting time and really got into the rhythm of it. I used seven skeins of Knit Picks Wool of the Andes that I had purchased in 2007 with the intention of knitting a saddle shoulder pullover. Last year I started fooling around with some other possibilities, and when Jane W brought her wrap-in-progress to stitch & bitch I knew I had found the right pattern. I had looked at the pattern online just the day before and thought I might like it; seeing one in progress convinced me. I've seen her wearing hers and I know I will enjoy mine. The only thing is that we have used yarn in similar colors, but I doubt we will wear it (often) at the same time and I think hers is more golden and mine more reddish. 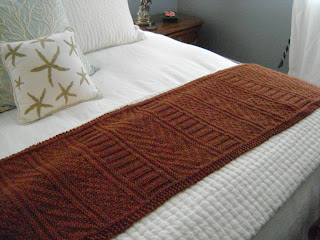 I fell asleep last night trying to remember how many blocking wires I had and trying to decide where to do the deed. This is an issue because The Amazing Roxanne loves nothing so much as the scent of damp wool. She has an insatiable desire to roll on it and chew it. I thought maybe I could get it blocked in time to wear it to stitch & bitch tonight. The first thing I did this morning was get the wrap into the sink while I had my breakfast. As soon as I was finished I started blocking it in Shana's Rumpus Room. I closed the door and immediately had a crying dog outside. I took pity on her for only a moment; the first thing she did was rush over and grab it with her teeth while trying to simultaneously roll on it. I pulled it up as soon as it was dry for beauty shots - I turned my back on  it draped over a chair to make myself presentable for the typical bathroom shot and Roxy jumped up to lay on it. The monster! Right now it's laying across my bed with the door firmly closed.

I may well use this pattern again. It's a really wearable garment that looks much more complicated than it was to knit, and the instructions were very clear.

I guess there are worse things she could roll on/in. :)

Poor Roxy, indeed! lol! You must let her have swatches, at least. And wet them.

The blocking tale is fab and so is the mirror shot! Love your hair and bon vivant look - I can't spell that! Jazzie also would go after new yarn boxes delivered by mail or the UPS. He was so sure they were for him!