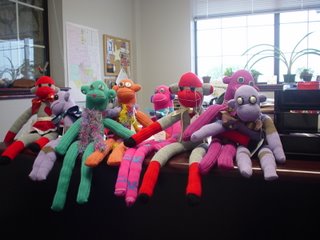 The weekend is here already!!!!!

Can't believe I haven't posted all week. OK, actually I can believe it. This has been Frying in Hell week at work, also known as DEADLINE. The last thing I wanted to do was type stuff in after I got home. Also, I was in major Monkey Mode any time I had a bit of time to spare.

These little monkeys are going to market. Tracy, in my department, has a table at a crafts fair this weekend and is taking "the kids" along. She and Heather are taking jewelry, and the monkeys will supply something different to attract a little extra traffic. Good for them and for me. I've had them lined up on the edge of my desk for the last two weeks, which will probably translate into some Christmas orders, so next week I'll be making monkeys again, but at a slower rate. Last weekend I made three.

This is the view from my office window at work. 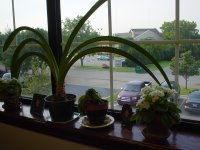 Nice, isn't it? The big plant is just visiting. It's owner has an inside office which does not agree with it. The four African violets all started from one plant I bought at Home Depot when we first moved back to 701 Cedar Lake. My department had been part of the Chaparral Diaspora when we ran out of space in the building in 2000. We were supposed to be back in a year. We came back in 2004. Now we are spreading out again. A couple of departments are now officing across the road, and we are breaking ground on another addition later this month.

Apparently we are very close to another big acquisition. I have mixed feelings about this. In a way I look forward to it - life in the office has become pretty routine, and it's almost (but not quite) fun to get a handle on a big project. And I can't deny the overtime involved would be a welcome addition to my income. The higher gasoline and home utility payments this year have kicked me around the block. However, none of us can forget the last big one - seven days a week for eight months. 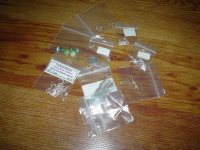 In other crafty goodness, please note evidence that I have visited the Spiral Beadery this afternoon, and not a moment too soon. Tomorrow is Shana's birthday. She's asked me to make her some new (green) earrings in honor of the occasion. Yes, there are too many little bags there for one pair of earrings. I am planning to make her two pair, and there is also most of the findings I will need for a couple of pair for Christmas gifts. I usually make a pair (each) for Shelley and her daughter, Jennifer, and Katie Humpries. They make lovely token presents. I'll probably need to make a trip to Elements Beadery in Bethany later in the season to get a few more items. 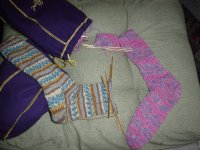 In knitting news, it would seem to be all socks all the time. I've currently got two pair in progress. One lives at the office during the week for my lunch time knitting. The stripey one is my football sock - an easy pattern to knit while I watch football. I do have another two projects on the needles that require more attention, and I'm just about ready to cast on for another. After some initial hesitation, I find that the bamboo dpns are my favorites for socks. I think I will still like metal needles for really small gauge, but I love the #1 bamboos. The birch needles not as much, although they are nice. The 5 inch length is nice and compact for a carry around project, but they are a little stiffer, and stickier, and not as pointy. Love the pointyness of my Chrystal Palace bamboos.

A crochet project is under consideration (afghan for Alex) to be started when the weather cools down a little more. He'll enjoy an afghan this winter, I think. I'll need to check out my patterns for something "manly". If I go with a red, white, and black color scheme I might be able to make about half of it out of stash yarn.

There is also an altered book on the (way back) back burner. I actually have the book. I bought it several months ago at a thrift shop, but haven't started working on it yet. There is also the small matter of my knitting journal, which is meant to feature pictures, yarn samples, and copies of the pattern of finished projects, with pattern notes. I do have some of that done. I've obviously got too many irons in the fire (and more projects are under consideration).

I love reading about my presents. I will keep tuning in as XMAS is coming up ! Shana