Oh yes - it's awful. This week has been totally idle, at least in terms of housework. I though yesterday afternoon would be a tidy afternoon, but I forgot that I had a haircut, so I spent an hour driving back and forth across town , plus time in the chair. Fortunately the conversation was good. When I came home I could have started in on the chores and really that was my intention, but once I had done my daily blog crawl and had a snack I noticed that Project Runway was on and I missed the first five minutes on Thursday when I watched the rerun from Wednesday and then I had to see the look on Heidi's face when Michael Kors made fun of Uli's German accent, and then Shana came home and we ran off to Walmart for the weekly grocery spree and then....well, then it was Cubis Time. Every time I play I swear it is the last time because it takes we THREE HOURS to get near my best score, and every time I fail to get a better score. It's such a monumental waste of time that it has been relegated to Friday nights ONLY. Anyway, today I am waking up in the same pit I woke up in yesterday. We'll be at the Old Orchard for breakfast with Shelley, and then Shana has to run off to work. Shana usually has breakfast with her on Fridays, but ran out of time this week, so we're doubling up. It's not quite killing two birds with one stone, it's more like Shana enjoys her breakfasts at the Old Orchard with each of us, and in order not to miss out we'll overlap. Fine by me, since recent overscheduled madness has meant that I haven't seen Shelley either. 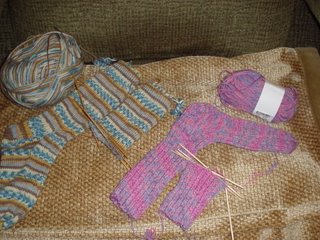 Current knitting is (almost) all socks all the time. These are the two socks in progress. The pink one is living at the office during the week, and the striped one if my TV sock. Please note how beautifully the stripes are matching up! We'll have to wait to see if it all goes south after I turn the heel. I'm not too (or at all) compulsive about the number of stitches I pick up for the gusset, and that will often throw off the matching for the foot a little, but I don't think it's a serious enough problem to make me want to make a note of how many I picked up on the first sock.

And in any event as problems go it's nothing. Our IT manager lost his youngest son in a stupid accident this week. He's been with the company for about eight years and we all just love him. It's breaking our hearts to think of how he must be feeling now. We have so many daily reminders of grief and distress all around us every day it's hard to justify how often we feel unlucky.
Posted by Unknown at 9:36 AM