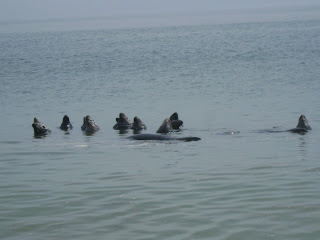 We have spent the last few Sundays at the beach - A beach, to be more exact. I love the Atlantic beaches of Cape Cod. Although they are a little drive away it's well worth the drive. It's late in the season, so if we are on the road by 9:00 am we can choose our beach. 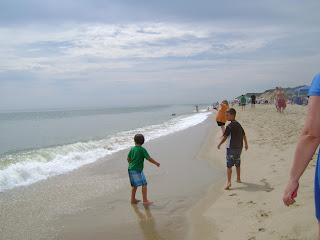 This time we chose Nauset Light Beach. We were fortunate enough to see large numbers of seals early in the day, and also fortunate enough that the seals left the area soon after we arrived. Seals are very interesting to see, but you must maintain a distance of at least 150 feet from them. When they are hanging around the beach you can't get into the water near them. Also, seals in large numbers draw sharks. Shark sightings will close the beach. Although you can stay on the sand, you are not permitted to go into the water. As if you would want to swim with the great white sharks that come every summer. This was a nice beach for sitting on the sand, but going into the water was not as nice as it is at some beaches. There was a combination of steep dropoff and large rocks that was unpleasant for me. The drop, the shifting rocks, and the undertow pulled me down more than once. throwing me onto the shifty rocks (bottom first, I am happy to say). 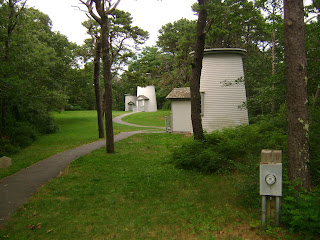 Shana and Dea complained of rocks being thrown at their legs when waves came in. Either way, the cold water and tumbling large rocks made us all have sore toes. When I say rocks I mean baseball to cantaloupe sized rocks. We brought boogie boards to play with, but never did use them because of the general ouchiness of the rocks.

One nice feature of Nauset Light Beach is the Three Sisters Lighthouses. Currently there is one brick lighthouse at Nauset. Two decommissioned lighthouses from Nauset and one from Chatham have been moved to a configuration much like the original three sighted at Nauset a short distance from the beach, accessible by a paved path.

And for something completely different: a mashup of Get Lucky and Soul Train!