(Part of) A Year in Shawls 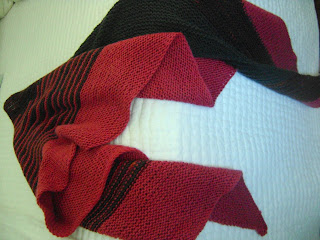 As a matter of habit I knit for myself from January to June and knit for gifts from July through December, with exceptions made for emergency gifts and irresistible babies. Generally I start with two pair of socks, one plain and one fancy. Beach and gardening weather come along at the end of "Knit for Myself" season, so sometimes that's about all I end up with. This year I did make my plain pair of socks, a super thick pair of Online self striping intended to keep me cozy in the rubber wellies that have been an inescapable part of my weekend wardrobe. 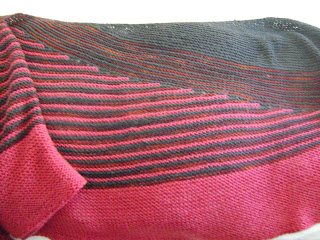 A comparative glance at my bulging handknit sock drawer and lightly stocked outerwear bin, supplemented by a weekend spent wearing wool outerwear in the freezing cold and unlighted house quickly readjusted my priorities. I seem to have plenty of gorgeous alpaca mitts and cowls but few heavy weight gloves and hats. I currently have a pair of convertible mittens on the needles, a pair of gauntlets  To warm up my alpaca poncho high in the queue, and am mulling over several cozy hat patterns. Of course I did buy some gloves for shoveling. None of my handknits will be put to such strenuous use. 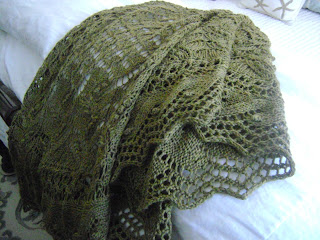 What I want to knit is shawls. They are so pretty, so versatile, and so much fun to knit. The magic of blocking always entertains me. Last October our knitting group informally discussed knitting the Color Affection shawl  by Veera Välimäki as a knitalong. I purchased the pattern right away because I was pretty sure I had enough of something in the stash to make it. Because of the interesting construction but easy knitting (all garter) it was a terrific TV knit. The odd shape makes it versatile, and the wonderful drape of garter makes it flattering. I used three colors that don't quite go together, but play off each other in interesting ways. I finished it in January and have already worn it many times. I call mine Color Affectation because I ran out of once color and therefore started the single color border several rows sooner than called for in the pattern. No matter, it's a very forgiving pattern! It gets a fair amount of attention whenever I visit a yarn store. 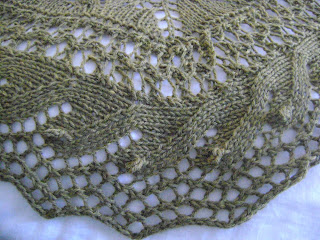 Our group chose Jared Flood's Juneberry Triangle  for a February knitalong. I started it in the last few days of January, but because I ripped out the initial attempt I consider it to have been a February start. Juneberry starts with a garter tab, has pattern on both sides,  has a knitted on border and bobbles: four new skills for me. It's a fun knit for a knitalong because it can look quite different with changes of needle size, yarn weight, and intensity of blocking. I like a BIG shawl, so I made mine up in Cascade 220 (also makes it inexpensive!) on size 9 needles and blocked it severely. Love It! It will be making its debut tomorrow at Stitch & Bitch. It does need attention while knitting, so it may not have been the best choice to knit at meetings  but I can hardly wait to see everyone's version.
Posted by Unknown at 12:13 PM