Because That's What We Do 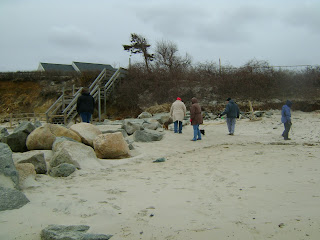 Cape Cod locals spend a lot of time at the beach, even in the dead of winter. I should say especially in the dead of winter. Although summer is the most beautiful time to visit the beach, it is the time when the tourists and summer people are thick on the beaches and a lot of Cape Codders are making most of their yearly income. The shoulder seasons are beautiful and the beaches are less crowded, especially in September and October when the water has not lost all of the summer warmth. Even in winter the beaches are beautiful, the more so because they are nearly empty. Everyone comes out to walk on the beach and enjoy the isolation. For comparison: 4 million people come to Cape Cod from July through August. About 200,000 people live here year round. Obviously in summer we are outnumbered in a big way! Also in the summer many beaches are limited to town residents or charge for parking. In the winter you can go to any beach you like at no charge. 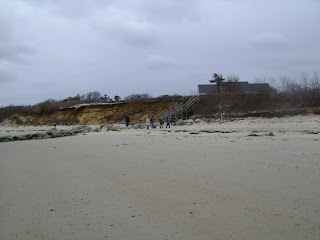 Shana and I would like to have visited all of the beaches of Cape Cod - a rather heroic goal! Today we went to Corporation Beach, which I had seen once before but Shana had not. It's a beach especially loved by locals with small children because the water is shallow for a long way and usually quite calm. It has no services to speak of, so is not a big tourist attraction. We nearly had it to ourselves, along with Shelley and a friend of hers visiting from Oklahoma. Roxy had been furiously bored all week, so a walk on the beach with a few strange dogs to greet was just what the doctor ordered. 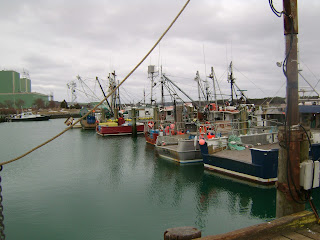 We intended to visit the Sandwich Boardwalk and the Town Neck Beach today, but due to some storm damage to the boardwalk we were unable to get on the boardwalk. We did take a detour down to the canal, which I thought was interesting, but since it's not scenic and I had to go to work today we did not linger. 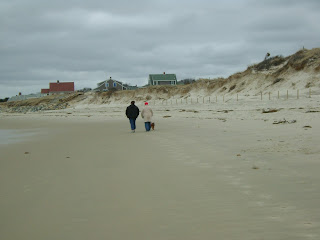 Tomorrow It will be South Cape Beach for a brief walk to entertain the dog and exercise Shana's achy back - as long as we don't have more of the awful weather we have had every weekend. Snow is expected again but not in the horrifying amounts we've had on past weekends. There are forecasts for a significant storm next weekend, forecasts which I hope prove to be wrong!
Posted by Unknown at 2:26 PM

Our beaches are the same in summer. We have a huge coast line but it's so hot inland that everyone flocks to the sea in summer. Like you, we wait until Fall to go.

I love that you feature your beaches from time to time as I will probably never see them any other way.