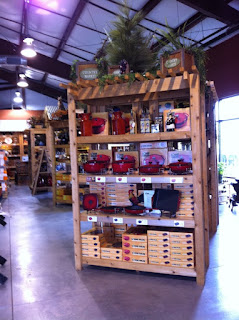 We started out Monday afternoon and arrived in East Falmouth Saturday afternoon tired and a little grubby, but having enjoyed a very nice road trip.  After Graceland we went on to enjoy the Lodge Factory Outlet, the Smoky Mountain Knife Works, Cabela's, and Ikea.  We wisely passed up the Coleman Outlet altogether as being altogether too tempting. What a good thing it was for us that we had no room in the car for purchases.  We just made a flying tour of the stores that interested us and mental notes of the things we might consider in future.

We have come to appreciate the quality of Lodge cast iron cookware, but I had not had the opportunity to see their enameled line - it's good looking and very well priced.  We did pick up some carrier bags, stands and cookbooks for Shana's existing collection of campfire ovens but were able to resist the other offerings.  I must confess I nearly purchased a couple of small fry pans, and may yet order them. 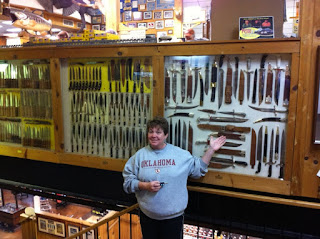 The Smoky Mountain Knife Works was a good stop - such beautiful pocket knives, and a full line of every kind of knife you can imagine.  I don't think I've ever seen so many knives in my life.  Shana picked up the quality paring knife she's been wanting, and I got a butter bell which will solve the ongoing disagreement over whether or not butter belongs in the fridge or on the counter. 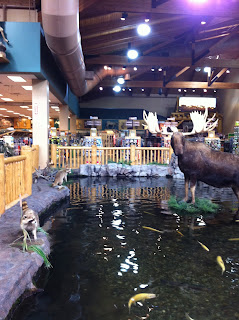 At Cabela's I had been hoping to check out the Mountain Man hat they used to sell that looked like a coyote hanging from your head, but settled for a spicy bowl of white chicken chili. Their deli featured sausages from a variety of game animals.  In addition to the stuffed deer I had expected  to see they featured musk oxen, a bear, and several Moose.


I was very pleased that we were staying next door to Ikea - I'd enjoyed browsing their website but had never been to one of their stores.  We got a lot of ideas for decorating the cottage we hope to have in the future, but the store has so much in every category it was overwhelming. 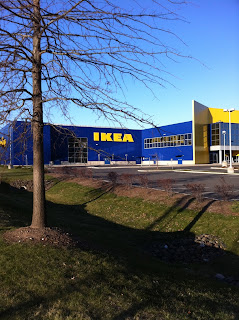 Our route took us up the east side of the Appalachians, through Virginia, West Virgina, Maryland, Connecticut, Rhode Island and finally Massachusetts.  I had not been that way before, so it was a treat to see new scenery.  It was lovely, but we missed spring.  When we left Oklahoma the daffodils were just about over but here they have not bloomed yet.
Posted by Unknown at 5:01 PM

"Butter bell" sounds intriguing. Been keeping mine on the counter since becoming cat-less some years ago.

Sounds as if you're happily morphing toward your next settlement.

OK now I am scared...what is a butter bell, do I need one, and why do I unpack the butter from the grocery sack and immediately put it in the refrig...but my butter dish is on the counter with butter in it for dinner? I am so confused and hope I sleep tonight.