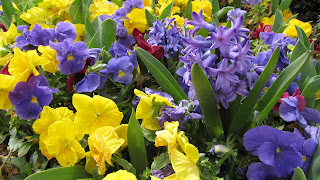 This week started with a reschedule of our first camping trip of the year. True to the classic Oklahoma weather, the 80 degrees we enjoyed Monday afternoon turned to freezing rain and sleet by Thursday morning. I can tolerate a certain amount of cold for the sake of a weekend away from ordinary life, but rain and snow were predicted for this weekend, so we backed out. 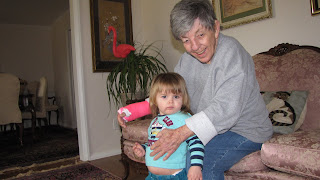 Turns out that was just as well, because Tuesday Aunt Rita fell in Nancy's kitchen and broke her wrist. Shana took her to the emergency clinic around the corner Tuesday afternoon. Wednesday I took the day off from the office to stay with Larry while Nancy took Rita to the bone guy, then took Rita home with me so Nancy could take Larry to his doctor appointment. Nancy had been up most of the previous night, so we kept Rita with us. Shana had already scheduled Thursday and Friday off, so she was 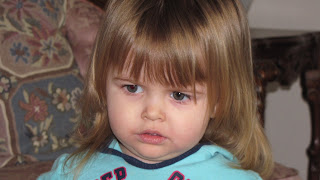 able to stay around so Rita would not be by herself for long. When I came home Friday Shana went out to take care of some of her work stuff.


Friday afternoon I brought Vivian home to spend the afternoon with us. It had been a couple of weeks since she had come over to visit, and she has changed so much. She's not really a baby a 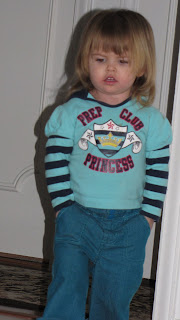 nymore - she's almost a little girl. Rumor has it she can speak in sentences - something she still pretty much reserves for her daddy alone. Personally I did not hear much of it. More cute pictures over on my Flickr gallery as always.

Saturday afternoon I got the dreaded box out from under my desk and started on the bedspreads. Four curtain panels will be plenty for the bed covers, but not enough for shams. I think there is enough left to make a pair of sweet little rolled pillows; we'll see. As I was cutting the fabric it became apparent that there was going to have to be some big time seam finishing because the fabric ravels like crazy. It's made up of two drastically different fibers - a thin slippery rayon like fiber, and a thicker chenille sort of fiber. I thought something like, and yet not quite a flat felled seam was going to be the way to go to get the ends under control and strengthen the seams. I tried it, but just handling the edges enough to turn them under was making it fall apart, with only mixed success turning the edges in. These are not beds that are going to get huge amounts of wear, but the spreads will

have to withstand more than just the force of a ceiling fan moving the air around. There was also the tiny little problem that if I had to finish one more inch of fabric that behaved like that I was going to heave the whole thing out into the street. My neighbors are not appreciative of messy front yards. 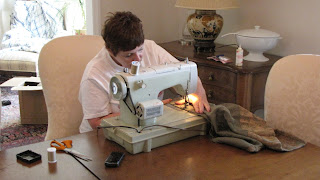 Off to Michael's I go to try out some Fray Check. I've never used it before, probably because when I choose fabrics I avoid the crazy fraying kinds. I also sew so seldom that most of the new technologies and products have passed me by. I'm still happily using my 1968 Kenmore sewing machine, and doing most of my cutting on the floor. This time I am desperate enough to Buy a Product. I was surprised to see how small the containers are - just 3/4 oz. I needed to stabilize a bit more than eight edges 74" long. I bought four bottles. Turns out I was able to do all of my edges with less than two bottles, and after trying out one long edge it looks like it will do the trick. It does make the edge a little crunchy feeling - not something you'd want next to your skin. Inside a finished seam, especially in a non-garment application I think it's going to be just what I need.