Out in the Woods at Last 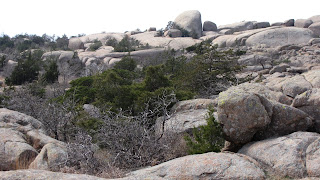 This weekend we finally got out to go camping. We had cool nights, but were blessed with partly cloudy pleasant days. It was really windy every day, but spring in Oklahoma requires wind. I took off Friday, and hit the road early. Camp Doris is small, and the fact that this was local Spring Break did not help matters. I got out of town before 8:30 am, figuring to be around when people started breaking camp. The campground 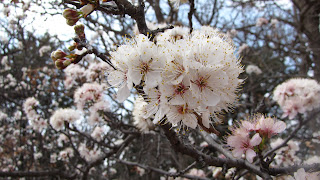 had been full the night before, but only three tours of the campground scored us one of our favorite campsites (7). The occupants were not ready to leave when I stopped by to check, but were agreeable to my leaving a few items at the site to mark it as taken when they left. I zipped up to the gate and paid for my two nights, then parked near the gate and took off for a walk. I've been to the Refuge many times, but had never hiked up to the top of Little Baldy. With plenty of time to spare I walked across the bluff (giving the b 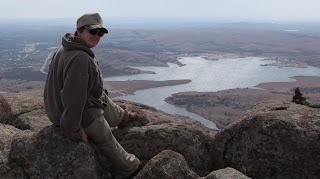 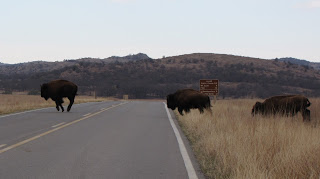 there a wide berth) and up to the top. The trail is not difficult, but somewhat stenuous in my current state of fitness. I hung out a while, then started down, heading over to my campsite instead of back to my car. The prior campers were just about ready to leave, so I strolled off to get my car. By the time I got back they were on their way and I started unpacking. I settled in for a little lunch, then put up the tent and got the campsite ready for us. After that I still had a little time to spare for a trip to the Visitors' Center and a walk beside Quanah Parker Lake, where some trees were still in bloom. The trees have not leafed out yet, and I got a glimpse of a bird which I could not immediately identify. It had bright red-orange sides and dark wings. I thought perhaps it might be an Easter Towhee, but now I am thinking it may have been a painted bunting. You can be sure I will be out watching for a better look next time I visit the area.

Saturday we drove to top of Mount Scott, where we took a few pictures and picked up a bag of trash. If only everyone who stopped by would pick up a little of the litter things would be so much nicer. It was a beautiful view in spite of the mist. Lots of cyclists were on the road - stronger legs than mine!

This time we saw a lot of bison, although none in the actual campgrounds. Usually I see deer, but this time they were grazing somewhere other than the places I visited. I did hear coyotes up on the bluff, and also a lone elk settleing down for the night. I'd often heard elk bugling in the fall, but this was my first sighting at the Refuge.

A hike to the top of Elk Mountain revealed the pitiful state of my legs, but was still well worth the effort. This time I did not see the elusive and endangered Black Capped Vireo, but I did hear one.
Posted by Unknown at 6:15 PM