Running By, Chased by a Peacock 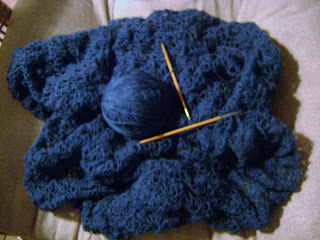 I have been sucked into the black hole of knitting that is my Peacock Feathers Shawl to the exclusion of every other activity. Every night I am at it for (at least) two hours, lots more on the weekend, accompanied by repeated viewings of all nine hours of LOTR. I do not understand how those happy few who have knit it in only two weeks accomplished it. I cast on August 16. To be fair I restarted after a disastrous beginning, then set it aside for a bit after my cycling crash. For at least a month I have had it broken down by how many rows a day I had to churn out to meet my deadline. I'm sticking to it, with next Thursday night being the the "drop dead" date. Today I finally hit the single digits in rows yet to go, which I celebrated by knitting two repeats of the pattern backwards after the center point. I am now tinking back to where I was when it was last going the right way. Lucky for me (not) I was knitting a row with lots of yarn overs and left leaning decreases. My favorites to rip out. I was thinking that I might be able to finish the knitting by tomorrow evening, and might still be able to reach that goal if the ripping and restarting of this half row does not take too long. 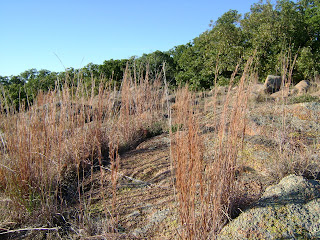 I did take a couple of days off of my knitting last weekend to go camping. We'll be out of the season for it soon enough, and Shana and I have both really wanted the quiet time away from everything. Last weekend the weather was just about perfect, so we took advantage of it to get away from town. I went down right after work Friday to be sure of getting a campsite, which gave me ample opportunity to walk around on the bluff by myself. It's so refreshing to be up there in the afternoon by myself, when the loudest sound to be heard is birdsong and wind. We got to hear lots of elk bugling at night, and not only did we hear coyotes, we even saw one. She was on her way to the Coyote Cafe, otherwise known as "Prairie Dog Village". We took our mountain bikes with us this time, and although we did not do any offroad cycling I was glad to have a little time to get used to that bike. We had the clear starry nights that I love so much out away from the light pollution of the city. Saturday afternoon instead of motoring into town to watch football we took a hike on Elk Mountain. The combination of exercise and sunlight boosted our spirits, as always. 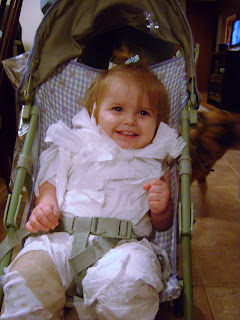 Samantha came over with Vivian last night to trick or treat. Vivian was wrapped up as a mummy. Samantha did not dress up. Alex claims Vivian can whistle, but although she did pucker up for me she would not whistle.

We are all eager for the election to come. For myself, I am creeped out by advertising for candidates I consider to be crooks or worse. Amazingly James Inhofe, who famously announced that global warming is a hoax, is favored to win by a large margin. His television advertising has been almost uniformly negative. One ad in particular intersperses pictures of felons with those of his opposing candidate and Barack Obama. I've given up on civil discourse at the office with anyone aside from the three or four Democrats in the building. It's not that I am reluctant to press my point, but I have arrived at the point where I can't listen to any more Republican b******t and still maintain the respect I want to have for my co-workers. I'm hoping for a Democratic landslide, and have a lovely Cotes du Rhone ready to toast the exit of the Republicans January 20th. Like many Democrats, I have my fingers and toes crossed that we will really be having this celebration.
Posted by Unknown at 3:39 PM