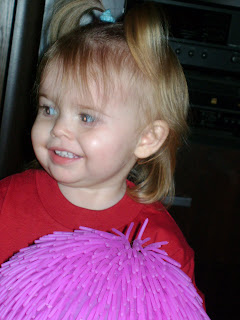 Last weekend was a busy one, and I had planned to put up a post on Sunday to detail the festivities but I was prevented by what appeared to be a terrible case of food poisoning. Instead of posting I spent the day in bed listening to movies with one ear and sleeping. Out of Africa is a favorite for that kind of day. It's long, not too loud, and I've seen it so often I don't really need to look at it. I did not feel well enough to read anything except magazines. I'm staying at home today just in case - I don't feel great yet and I don't want a repetition of yesterday's experience.

Vivian came to spend the night Friday. I must admit I was a little dubious, as she's only been here overnight once before, and that ended up being a night with very little sleep for either of us. My plan this time was to set up her portacrib in my craft room so that I would not disturb her sleep, nor she mine. I put her down early; she shrieked for 3 minutes, then quiet reigned until Roxy woke her up in the morning a bit earlier than her usual t 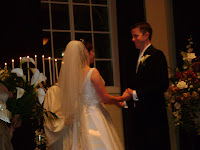 ime. Vivian took a little nap on my lap later in the morning to make up for the short night. It was fun to have her over, and a nice distraction for Rita, who was otherwise obsessing over the wedding to take place later in the weekend. I was able to get Shana's pants pinned up while Vivian was there (no one would believe how fast a child who just saw scissors can move), and got back from taking her home in plenty of time to get the pants hemmed and for all of us to get ready for Kate Humphries' wedding. 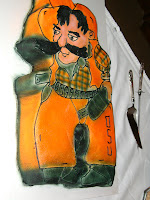 The wedding was beautiful, and the reception a lot of fun. It was fun to see everyone dressed up for the occasion. Typical of Oklahoma weddings, there were periodic announcements of the evening's college football scores, and the groom's cake was a representation of Pistol Pete, mascot of Oklahoma State University.

Like all weddings, or other family gatherings, it's a combination of happiness and sadness to see everyone. Some are looking good and doing well, others have suffered sad reverses in health since the last time we met. It's a little hard to believe that Katie is all grown up now; I can all too easily remember her as a pre teen.

Now that all wedding projects are done I can turn to the combination of Christmas projects and other plans that have been set aside. The blue baby blanket is finished and wrapped around the intended recipient.