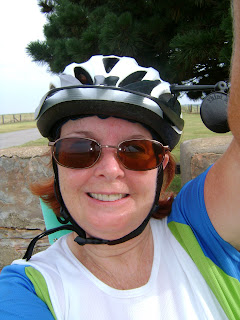 This weekend saw one of the most popular events in Oklahoma City cycling. Spin Your Wheels is a yearly event benefiting The Children's Center in Bethany, Oklahoma. The Children's Center is a non-profit pediatric hospital. The turnout is always great. One reason is because the schedule always puts it about two weeks before the Hotter N' Hell Hundred in Wichita Falls, which makes it the perfect tune up for that ride. It starts right on the west side of the metro area, so it's easy to get to without staying overnight or driving out before dawn. Spin your Wheels is also generally agreed to offer the best food of any event. Before the ride there are muffins in addition to the usual fruit and cookies. Often Starbucks supplies coffee. Every stop has a great selection of snacks and the volunteers for this ride are always great. Lunch is served after the ride - this year it was from Swadley's Barbecue. Most years the ride goes south through Tuttle, OK. This year they tried something different and took the ride out Historic Route 66, through Yukon and El Reno. We were fortunate in the weather, having a cool and overcast morning. It was really windy, with a stiff south wind during the nearly whole ride. Because we went out and back across a route that 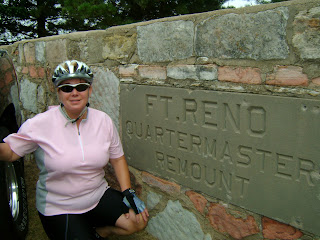 went almost directly west from the city, we "enjoyed" the same wind for the whole ride instead of having a portion where the wind was at our backs. I'm not sure how I feel about the route compared to the former route. I think there was less traffic overall, but going back through downtown Yukon around noon the traffic was a little hairy. I do think that the number of riders that participate (over 1,000 this year) makes this a more viable route than the one used in prior years, even though I found it to be less scenic. The longest segments were on either a four lane or two lanes with wide paved shoulders, which made it much easier for a large group of cyclists and motorists share the road comfortably. I rode the 50 mile course with Shana, and we had a great time. She's having a lot of fun with her new bike, and Ruby was finally able to cure Blue's ongoing derailleur problems so I had a good ride too. Additional pictures over at the Flickr gallery, as always. Link on the sidebar. 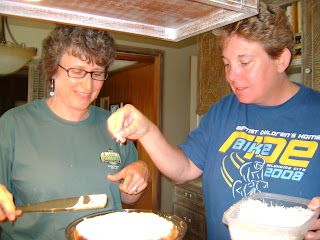 Shana and I hosted a brunch for our cycling group today. Brunch seems to be the only thing that fits into everyone's schedule this year. We've all been riding, but it seems that we can all get together for a ride only rarely. Shana is a terrific cook, but baking has been the weak link in her repertoire. Saturday Dianne came over for a cake lesson, followed by a 7 minute frosting lesson Sunday morning. For her first scratch cake Shana chose my fave - coconut! She picked a rather old-school recipe that seemed rather labor intensive to me, but it let her try out several important techniques with Dianne's expert supervision, It turned out to be beautiful, delicious, and well worth the effort of cracking and grating fresh coconuts. 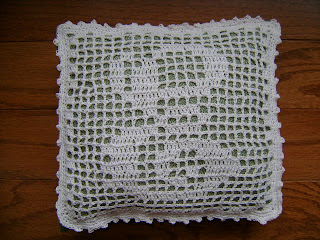 In crafty news, I have completed the prototype for the ring bearer's pillow. Because I had never done filet crochet before I needed to make a practice piece to get used to using the finer hook and crochet thread. Crochet for me is a low-stress activity, even when it involves a new stitch or technique. It's so easy to tear out a mistake and do it again that I don't get nervous about it. Also, since the piece is only 8"x8" it didn't bother me much to tear out a row or two to catch a mistake. I didn't go with a wedding theme for my practice piece because I thought it might be more fun to make something I'd like to keep for myself. I think it came out quite pretty. We'll see if the Mother of the Bride likes it, and what changes she'd like to make for the real thing. I did this one with a simple picot border, thinking that the bride's taste for most things seems to be streamlined and modern, but for this one item she might like a more elaborate border. I'll have to reserve time for that project before November, and I do have a baby blanket in production for the end of October, but I think I'll skein up some yarn and cast on for Icarus this week. Because what's crafty time without a little pressure? If I can finish it in time Icarus would be nice to wear for the November wedding, and it's said to be the best practice run for the Peacock Feather shawl which I want for next summer.
Posted by Unknown at 5:33 PM