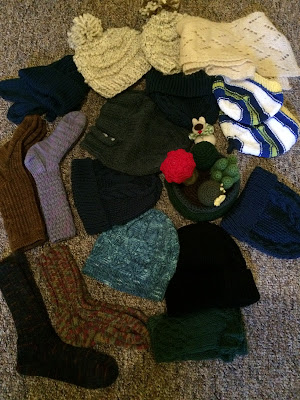 Holy Cow, it's been a long time since I posted. I kept seeing the title of my last post show up in comments and thought there was surely something wrong because I never go that long without posting. Shows what I know.

I've been knitting heavily since my last post, and nearly all I made were Christmas gifts. I think I made nineteen this year, including one crochet project and one needle felted item. nearly all were small in terms of yardage used, but many were fiddly knits that took time. I did finish on time, with plenty of time for shipping, but next year I should really rethink the gross number of knitted gifts! This is pretty much as many as I can manage, and I had to take off a couple of days near the end because of sore hands. I don't like to start earlier than July for gifts, but maybe... For wrapping I had a fair amount of ribbon but no fancy prefab bows, so I used my extra time making pom poms and origami package decorations, plus embellishments cut out from Christmas cards I received last year. Because there is no such thing as too much to do. Because I have lost my mind. 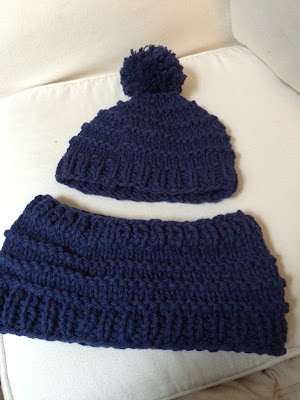 I thought my first project after the holiday portion of the knitting was done might be a vest I promised Shana, but because I am going out of town next week I have decided to start that after I get home from Denver. I want to be sure of a good fit, and that will be more likely if I have the recipient close by. I have had a few more custom requests from a certain family member, but they are pretty small items (boot toppers, neck warmers) which I can squeeze in before or during the vest.  I probably have yarn for boot toppers in my stash right now, and maybe even something suitable for a neck warmer. Right now I am concentrating on a few little items for myself, especially things I want for the coming winter. I have done a super bulky hat and cowl for myself with yarn I bought at Rhinebeck - each took one evening including winding the yarn into balls. Just a palate cleanser to prepare for my winter selfish knitting. Next up are four projects, three of which are already on the needles: A sport weight rectangular shawl from Hunter Hammerstein's new book (not cast on yet, but may be tonight), a plain sock with yarn Sami gave me for my birthday two years ago, a square lace shawl, and a button wrap of a rather improvised design using yarn of uncertain provenance. That yarn is from sheep owned by an erstwhile neighbor of a lady in my Monday knitting group. She likes a soft and elegant yarn; this yarn is quite rustic. It's a lot like Fancy Tiger's Heritage, but a little tighter spun and bulky weight, with a little variation in the dye. Very sheepy, scratchy in the ball but not bad after washing. I did a proper swatch including washing for this one, and weighed it out to see what kind of yardage I have. It will make a cozy and rustic shawl.

Of projects for which I have purchased yarn - three, plus a pattern for which I need 1300 yards of bulky yarn in a single color, and which is destined to be my Rhinebeck "sweater" . It's really a poncho. The new year has not started yet and I may have already bit off more than I can chew.