Now We've Got the Place to Ourselves 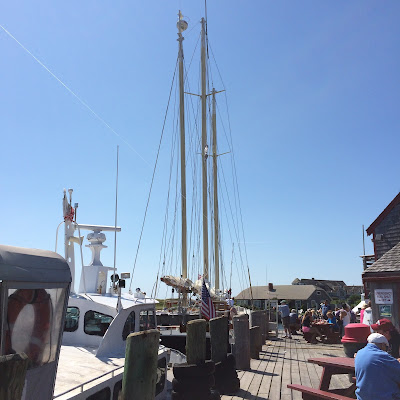 Yesterday was not only Labor Day,  but also the day the tourists go home. Our little secret that September is the best month on Cape Cod has been leaked, but most tourists and summer people do leave by Labor Day. The weekend itself tends to be busy, and the traffic intense, but it's really the last of the inundation. I may have mentioned that with 220,000 year round residents, we play host to 4-5 million tourists who are here mostly in July and August. They get here via two four lane bridges, and once they are here they find only one limited access highway going north-south, and one east-west which turns to a two lane halfway down the Cape. Everything else happens on mostly two lane roads. What that means for traffic is that you don't turn left in the summer if you can avoid it, and Cape residents have developed their own traffic rules.  If you are turning right and there is someone waiting to turn left at the same road you pause to stop traffic and let them turn before you. If you are turning left or right you let the person exiting the street you are turning onto turn out in either direction. Locals turn out in front of any car no matter who has the right of way. People tend to pass left signalling cars on the shoulder. This is why I do not ride my bike on any road. 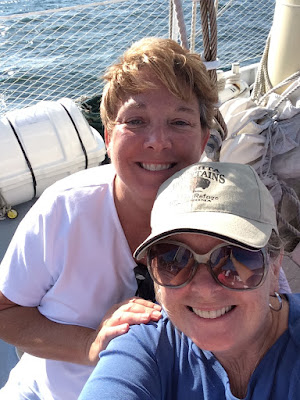 Our weekend has been busy - Shana's birthday is Wednesday so we have extended the festivities over the weekend and into the week. Yesterday Shana, Dea and I took a ride from Falmouth Harbor to Martha's Vineyard on a schooner: The Liberte. It's a beautiful ship and we went out on a beautiful day, if a windy one. Labor Day is the last day they do tours from Falmouth Harbor.
They Sail down to Annapolis after that and sail until mid October.  It was crazy rough going out because of the wind and the direction of the tides, but we loved it. Fortunately none of us are much given to seasickness. We left at 2:00, and by the time we came back the excellent clam shack at the dock which was packed with diners when we left had closed for the season. As fall wears on more and more businesses will shut down until next summer. 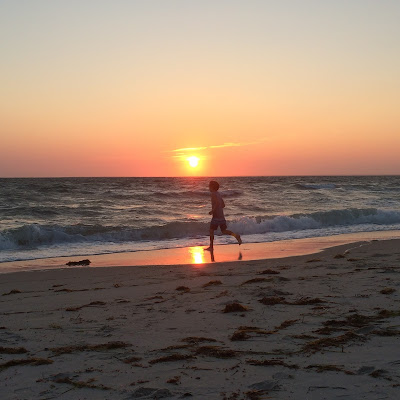 After our sail we picked up a pizza at Steve's Pizzeria (and more!) to take to Chappaquoit Beach for the sunset. I can recommend the pizza - not too thick on toppings and sauce, with a really good crust made with olive oil. We were hoping they might deliver, but we picked it up on our way out.  The plan was to eat it sitting on the beach and maybe even go in for a dip. Intense wind and big waves changed out minds. We sat behind my car sheltering from the wind, then I went for a walk down the beach. I was glad I had a sweatshirt with me. I always bring one no matter how warm the day is, because the sea breeze is usually quite cool. The winds had dropped a little and the waves were a tiny bit smaller after we finished out meal. Other locals gathered for the sunset and we all applauded when the sun went down.