Well, not actual mayhem, but pretty far from what I am used to. This week and last we have had rain and rain and rain. Mainland Massachusetts has received crazy amounts of rain and severe storms. Here on Cape Cod we have not had that much, but enough so that I have only watered once for just a little while. I had planted some kale seed and wanted to improve the chances of germination, otherwise I would have let well enough alone. The Oklahoma July I was used to consisted of heat, and more heat, sometimes with no measurable rain at all. It's not nearly so hot here, but the humidity is off the charts. It actually makes my rather straight hair bushy and wavy.

We have as much lettuce as we and our friends can eat. I have a nice snack of snap peas everyday and plenty still make it into the house. Carrots are making, but we are still a good month out from harvest. Haricots Verts are nearly ready, and purple  bush beans will hit the menu before the weekend is over. So far our herbs are keeping up with our requirements. This is saying a lot because I love parsley.  No tomatoes yet. I am getting some blossom drop on my Beefsteak, so will try a little fertilizer, although there is plenty of compost and cow manure in Tomato Land. It may be the damp conditions and warmish nights are working against me. Lemon Girl has set a few, but they are smallish still, and the cherry tomato plant has one spray of fruit and one of flowers. I know my garden is generally a little behind some others I have seen 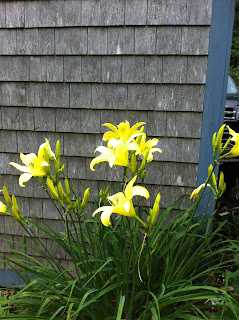 around here, so I am being patient. Cucumbers are setting fruit well. All things being equal we should be overrun with cukes in a few weeks. My basil still sucks. I am going to move some from the patio to the garden as soon as we have the second set of leaves to see if they will do better there.  The before and after pictures are May 2 and July 11 of this year. Quite a difference, I'd say!

We are doing great for pollinators, which I was a little concerned about. I don't see many of Jill's honey bees, but we have loads of bumble bees, solitary bees, and tiny wasps. I think having so many flowers surrounding the bed has helped attract our insects. Oddly enough, the only flower that seems not to be attracting bees like crazy is Monarda (bee balm).


Tonight we are going to see Melissa Etheridge at the Cape Cod Melody Tent. It's a terrific venue - rotating stage in a tent: a nice smaller venue. I don't care for big concerts at all. The acoustics are seldom good enough to enjoy the music or even make out the lyrics, and I find big crowds tiring. A smaller venue is exponentially better for me. The Melody Tent gets a lot of great acts, but we are limiting ourselves to one per season. We'll be camping in Ossipee New Hampshire the last week of this month, so I think our summer is shaping up to have plenty of entertainment, if not fine weather and beach days.

This week I have four dogs.  Mitzi has moved here from my father-in-law's house, as his condition is deteriorating. We still have the Amazing Roxanne, of course, and two dogs visiting for a few days. Peyton Manning the Chihuahua is mixing it up with the rest of the pack, and Sparky is staying in the basement out of the traffic pattern, as befits his elderly (23yrs) state and poor state of health. We call Sparky Keith Richards after his advanced state of decrepitude and the sad state of his hair. I think having the extra dogs here is helping Mitzi settle in, as all the other dogs have stayed here before and know the routine. The best dog teacher is another dog. She is a barker, and coming from a pretty isolated house set far back from a quiet road to one on a rather busy street she needs to adjust to the activity level outside. The other dogs let her know when something is worth barking about. I take the three younger dogs out for a daily walk to get Mitzi used to the neighborhood and prevent squabbling. It's the high point in their day. Little Peyton does not know how to walk on a leash, which is a common failing with tiny dogs, but he is learning to stay on the left and not wrap himself around my legs. His leash is one of the retractable kind, which I find to be less than useless.

Looks like you're being productive. The weather here in Ohio has been weird. LOL

what a happy post! am going to buy some snap peas myself in a few mins. to serve my guest when she arrives.