Take a Ride on the CCRT 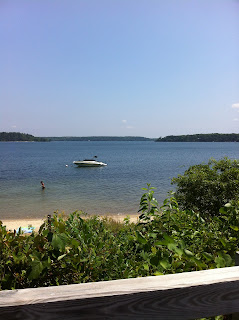 One of the nicest amenities on Cape Cod is the Cape Cod Rail Trail (CCRT for short). We do not have a railroad anymore, but the old Right of Way for the Old Colony Railroad Company has been transformed into a wonderful bike path. It's pretty flat, well supplied with ice cream and bike rental shops, and will even take you to the Cape Cod National Seashore. I've been riding from Dennis to Wellfleet as often as I have time for a 70 mile ride, but there are plenty of parking areas along the way for those who want a shorter ride.  A day's ride for me shakes out like this: 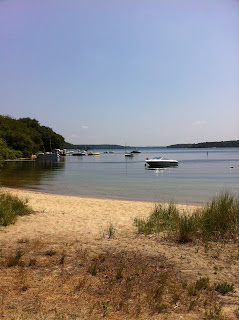 I don't have anyone to go for a long ride with right now, so the first thing I do is plan to get out early but actually leave the house at 10:30 because I don't have to be on time for someone else. This would have been suicidal in Oklahoma because of the heat, but even in the heat of the day today the temperatures on the trail did not get higher than 91°. The humidity was a little high, but the air temperature was cool enough to support life. Getting ready involves making a sandwich to eat on the way to the trailhead, making up my bottles (one water, one PowerAde & water half & half), sunblock, charging my phone, yada, yada, yada. Then I check everything twice to be sure I still have everything.

Once at the trailhead I lollygag around airing up my tires and changing shoes, then it's off for a ride. For the first five miles I mope along because my legs hurt. I'm sure my seat is at the wrong height, I've planned too long a ride, I don't really feel like it, I didn't have enough sleep, and besides it might get hot.  I can't get into a rhythm so I keep speeding up and slowing down. For the second five miles I remember that my legs always feel bad for the first eight or ten miles. I remember that this was my idea, and that because I am riding alone I can turn around at any time. At around twenty miles I am feeling good, and I pick up the pace. I decide to go on to the end of the trail, then turn around and come back. By this time I am tired of the song that has appeared in my head but can't think of another one. I wish I had brought my iPod even though I don't like to wear it on a ride. At forty five miles I stop for a break at Arnold's. I order a coke and think I may also have an ice cream. I change my mind and think I don't need anything else. Ten miles later I am hungry, stupid, and my legs are tired. I consider the choice between stopping for ice cream or eating an energy gel from my back pocket. I brood for five miles, then decide on ice cream. Ice cream peps me up, but while I was eating it I got a little stiff. At 60 miles I decide my feet hurt, my behind hurts, and the wind shifted in a way I do not like. At 65 miles I'm feeling pretty good, and slowing down a little to cool down so I don't stop suddenly at the end. It's been kind of a fussy ride but I'm so glad I did it. A long ride always leaves me happy and relaxed afterwards.