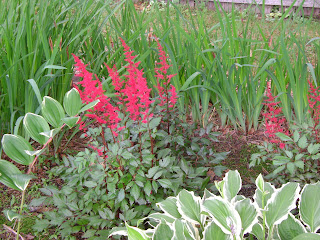 We are still having cooler than expected weather, which I think has slowed some things and helped my hydrangeas and transplanted hostas settle in. 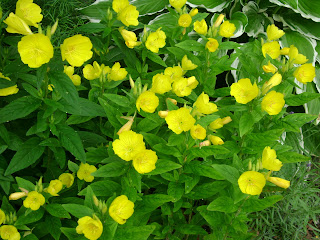 Blooming this week are Evening Primrose, The Fairy (which was slow to take off but is now showing enthusiasm), Astilbe, Heuchera, Lavender and Stella D'oro Daylilies. I tend to consider the blooms of the particular heucheras I have as a distraction because they are not the most striking feature of the plant. The evening primrose that I planted last year has spread to cover easily three times the area that I planted, and has also come up in an area where I do not remember planting them at all. They might be a menacing thug, except that in their main home they are in front of a mass of threadleaf coreopsis that should be a match for them. Also they are pretty.The coreopsis is backed up by some obedient plant that has shocked me with its vigor and Russian sage which looks flimsy and puny this year but because I took only teeny tiny bits of it last year I think next year it will be a formidable opponent. If the Russian sage does not look stronger next year I will move it to a sunnier location not I will move it to a sunnier spot next year. The lavender in that bed will be too crowded by the evening primrose and one of my giant hostas, but next year I will have more sunny bed space and I will move it over to a better spot for sure. The heather that is camping out in the back of that bed will also be moved to the sun. 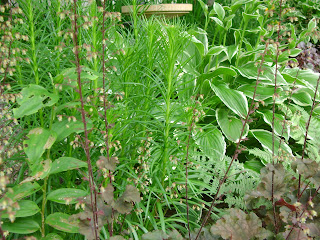 In bud are red and orange daylilies, threadleaf coreopsis, echinacea and hydrangea. I would have expected to have the butterfly bush starting to bud by now in Oklahoma, but our spring started later and has been very cool so far.


I'm not sure if this week will be typical of where my garden will be this time next year because of the cool weather. I'm a little behind on weeding because of Jennifer's two week visit. I did weed last week, but not to the extent I might have done had I had a little more free time. 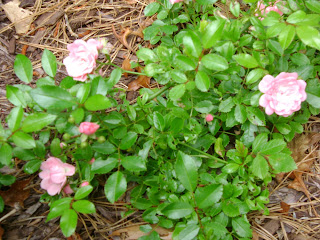 My main concern right now is that I have nothing at all in bloom in the front yard. The liatris and Rudbekia are budding, and one of the new hydrangeas has buds. There is plenty of Montauk daisy for fall bloom.  I planted a little bit of Rosa Rugosa but it is not going to do anything this year - I had to chop the plants I took out with an axe and while I think it will grow well from the roots I don't there is time this year to see much of anything. Once it settles in it will bloom off and on most of the summer, but it's a long range plan. Shana wanted pots on the front porch and I think she is right. I was holding off on the expense,  but if we don't get pots out this year we will next year, and they will be nice and big. The front porch faces west so I know sun lovers will do well there.

glorious! I'll have to get out a Burpee catalog to see if I can identify all those flowers you're talking about.

Oh I am just in love with your garden. Wowzer! So fine! You planned well, my dear.