Shana and I are both off for the weekend and have therefore overscheduled the time! Our friends Shelley arrived  with her daughter yesterday morning. They are moving to the Cape for a while and are staying with us for the weekend. They brought along two dogs and a cat - one chihuahua named Peyton Manning, one extremely elderly schnauzer mix who is named Sparky but looks more like a doggy Keith Richards, and an older cat. Roxy was fine with the dog visitors - she has known Sparky for years and was glad to see him. The cat was intriguing. Turns out because of a landlord issue the cat will be living with us. This will involve some cat box adjustments because Roxy is an inveterate "snacker". Right now Midnight (the cat) has decided the basement stairs are hers and hers alone. Typically cat: she sees all that comes and goes and is seen by one and all, with the added charm of possibly sending someone to her death should she fail to see the cat on the step. Roxy is afraid to go past her. Even with this inconvenience Roxy is all smiles with all the company. I have hopes that she will enjoy Midnight's company. She's lived with a cat before and they got along fine.

Last night we all went to a Red Socks game in Boston. We parked at the end of the Red Line and came in by T. This takes a little longer, but saves about $30.00 because parking near Fenway Park is hideously expensive. We had perfect weather and  great seats for an exciting game. On the way to the game we dropped Roxy off to spend the night with Mitzi the Fiend and her buddy Louie rather than leave her alone with the cat. This worked out brilliantly, except that  due to the crazy weekend traffic on the Cape on the way to drop her off at the sleepover Shana had to brake suddenly. Roxy was on my lap; I grabbed for her so she would not shoot across the car like a guided dog missile and jammed my finger against the back of the seat (I was sitting in the back seat). If it was a toe I would just think it was broken and tape it up, but I don't want to go there with a finger! It's ugly and purple, but is not too sore because it is so swollen. I'll see Dr. Lisa for BBQ tomorrow and get her opinion. 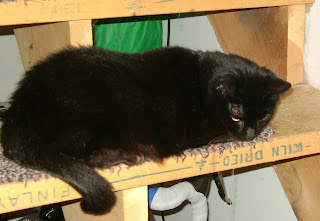 Today was a big yard work day for me. I was hoping to make Shana mow and edge this week, but she's been out getting Shelley settled in her new digs. Because Shelley only brought what she could fit in her car she needed a few items to settle in to her new place. Shana & Shelley hit Cape Cod Pickers for some things while I wrestled the yard into respectability so it would look nice for our BBQ tomorrow. I ran by the hardware store this morning for eye protection before using the edger, but before I use it again I have got to have some ear protection. That thing is super loud.

And for extra animal fun, here's a video of mistaken identity:

Wonderful post, so many interesting things. Hope your finger has recovered.

I sort of hate my male torts because they rag and harass Poko Ono- the female- mercilessly. Sometimes I want to kick them all the way across the yard.