The Pinkest Thing I've Ever Made 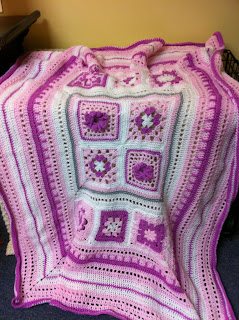 I'm nearly finished with Vivian's afghan, and nearly finished with the whole idea of pink. It's the second pink blanket this year, and easily the pinkest thing I've ever made. This is not a great picture - it's not quite finished and hasn't been washed, but the color (as it shows on my screen) is correct. It really is this pink. She asked for pink and purple with flowers and that's exactly what she's getting! I may put another couple of rows on it and then put a shell edging around it. It's not an adult size afghan, but it's not an adult style either, so I don't feel bad about winding it up at a smaller size. When she's grown up she can ask for something suitable for her age. 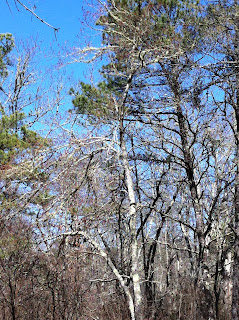 So far this week at work has been physically strenuous. One of the stockmen and I checked in 142 boxes from UPS. The UPS guys offload the truck, but we have to get everything on carts, into the building, and distributed to the correct aisles in the stock room. Because 142 boxes (and rugs) were too many for our four big carts I ran a couple of them downstairs and offloaded them onto the floor so we could reuse the carts. By the time we got everything distributed around the stockroom I had probably moved the equivalent of  250 boxes, not counting the ones I had emptied earlier in the day before the truck came. When I came home yesterday at noon the few minutes I was in the car was enough to make me stiff all over. Probably a sign that I need more exercise.  I didn't do much yesterday afternoon, but today I had to get out for some walking to loosen up. Lucky for me the weather was perfect. These perfect days before the summer people arrive are golden, and I try not to let many get away without taking Roxy for a walk in the woods or on the beach, or both. 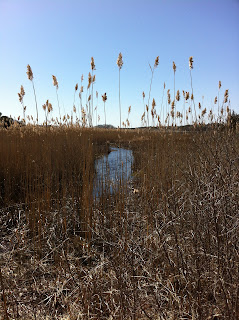 Today Roxy and I visited the Jehu Pond Conservation Area, which is part of the Waquoit Bay Estuarial Reserve, and a wildlife refuge. The paths are broad and well maintained, and areas which are restricted are clearly marked. Given the number and enthusiasm of the local tick population I am not all that tempted to leave the main trails in any wooded area. I was hoping to see some birds, but with Roxy snuffling along I imagine most birds quite sensibly left the area.  Once we returned to the car we went on the the Mashpee Town Beach for a walk along the shore, with a short detour into the dunes. It's getting close to piping plover nesting season, so trails through the dunes are not available although we could walk around on the larger trails. Someone was apparently taking a nap in the dunes. When I passed I saw someone lying there and had to go back for a second look. I thought that a normal person would not be out there so maybe it was a dead person. Fortunately he moved and I went on with my walk.

In a rare display of 'craftiness' I made small needlepoint Easter baskets for my neighbors kids. I used plastic canvas and variegated knitting yarns (blues and cream for Bryce and pink/green/white for the girls). I hope they like them.

That is super pink but cute! Great job!