Before and After Three 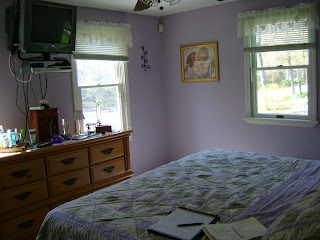 Lots of things will be installed this week, so more before and afters should be coming later in the week. Today I am going to show you our bedroom although there are a few things still to be done. 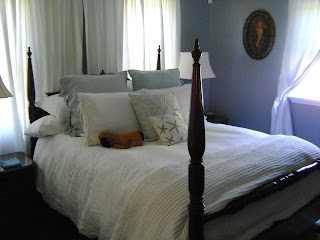 The previous owner was a big fan of lavender. I think she was actually planning to paint her next bedroom the exact same color. People who have known me since junior high might recognize the color of the "before" as I think it was the same color as the bedroom I shared with Judy back in the day. The previous homeowner had the foot of the bed toward the windows, which meant the head of the bed would be next to the hall and in order the reach the far side of the bed one would have to walk all the way around the bed. There was a television bracket mounted on the wall between the windows. There was also a mirror mounted over the head of the bed. Window treatments were lace valances and mini blinds.

The biggest change we made was to pull up the carpet and put in bamboo flooring. The next most noticeable change was to paint the room a rich medium grey. We moved the bed to the window wall because I did not want my head to be in the hall, and put the dresser under the existing mirror. Long lined linen drapes went on all of the windows, with the drapes carried over between the windows behind the bed. 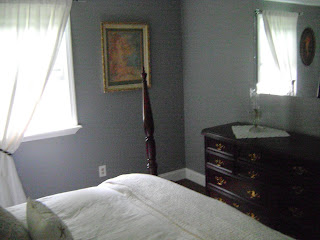 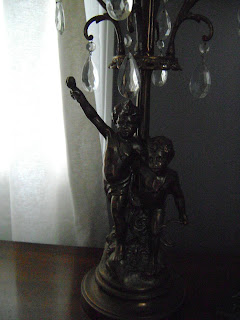 There are still a few things to be finished. We will be putting some kind of frame around the mirror and adding some art to this wall. There is currently a gigantic brown ceiling fan over the bed which will be replaced by a sweet white wrought iron chandelier with sparkly crystal drops. We had hoped to have the chandelier installed already, but the fan is hardwired in without being attached to a wall switch and that is not going to work. We'll have to have an actual electrician out to make that installation. I need to finish painting the baseboards, and we are looking for a vintage runner or dresser scarf in white embroidery or crochet for the dresser. We have not yet decided the fate of the night stands. They are kind of pretty, but walnut. I am thinking of painting them white and changing out the hardware for something with a little more sparkle.

The last picture is a detail of our bedroom lamps: vintage beauties that fall somewhere in between gorgeous and hilarious. I'm afraid the pictures might be a little grainy and dark, but I was trying not to use the flash.
Posted by Unknown at 4:52 PM