Still Feasting After All These Meals 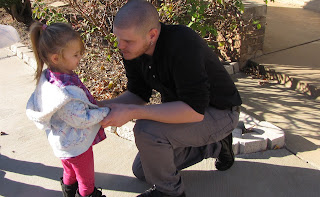 I've survived two Thanksgiving dinners without actually exploding, although I must admit it's a near thing. I cooked for the kids and their dad today, and coincidently rounded out the already prepared dishes in the fridge (AKA leftovers) so we won't have to do any shopping or major cooking for the next week.
I tried a few new things this year. I butterflied the turkey: the lesson is that I need to cook it for a much shorter period of time, and my kitchen shears were not worthy of the name. I made 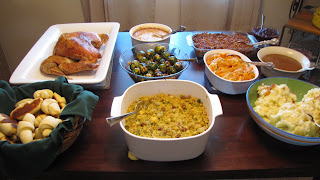 Bobby Flay's roasted Brussels sprouts with pomegranate seeds: prepare the pom ahead of time; it's messy and slow. I also have loads of sprouts because I bought a whole stalk. It might not look like much but that stalk is over two feet long! I put a graham cracker streusel topping on my pumpkin pies: a big winner. No visible cracks in the pies; they are really pretty and very creamy. Blueberry/cranberry sauce is delicious. 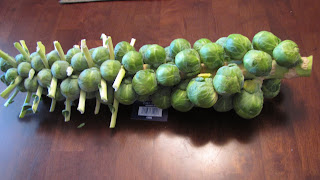 I had a dinner roll failure this year, probably because I tried to cook two pans one on top of the other in my rather small oven. I do know better but I was apparently struck stupid. They ended up undercooked but burnt on the bottoms. I should have used two ovens. It's an embarrassing failure because they have become something of a signature dish that I bring to all kinds of dinners.
Oh well. It's pie for breakfast for several days, football out the wazoo and all the sprouts I can eat. How bad can it be? I won't be shopping this weekend with all the crazies; I'll be cozy at home enjoying some quiet time.
Posted by Unknown at 5:45 PM

Everything looks delicious, and your food all sounds delicious, plus leftovers are always fun, fun. :)

When we go up North, the growing fields are full of fall vegetables, and you can smell the Brussels sprouts before you get to the field. I love them. And the flowers are sort of pretty, too.