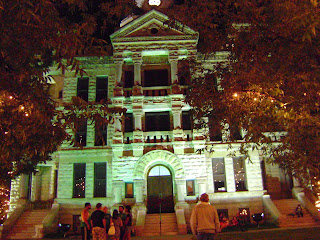 This is the Oklahoma Texas weekend that we all look forward to every year in excitement and anxiety, depending on the state of the Sooners' Offensive Line. This year we did not know what to expect, except that Shana and I knew we were driving down to Denton Texas to visit the Humps. It's a shortish drive but far enough from home that it feels like a vacation. We're always glad to see them and it's always a relaxing and restorative weekend.
Matt took me to charming downtown Denton for a delicious ice cream on the square. I did not know that Denton had such a pretty downtown. 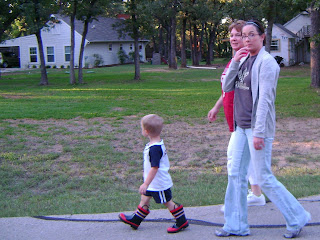 It's well worth a visit, and seems to be much appreciated by the locals. So many smaller cities have not been able to preserve their downtown and it's good to see one thriving. The scrumptious home made ice cream at Beth Marie's was just one of the appealing features. The courthouse in the middle of the square is beautifully restored and the center of a lot of activity.
The Oklahoma Texas game was a good one - lots of exciting plays (and some inexplicable plays). It was a lot of fun to watch, but seems to have done little to advance the Sooners in the polls. This is fine by me - I'd like to see a Big Twelve Championship. a ranking within the top ten, and a good bowl game at the end of the season without the stress of looking for a national championship. We caught parts of some other games as well - Alabama looks great, and the Oregon Ducks still have the single ugliest uniforms of any college team in the known universe. Like Boise State's appalling blue field I suspect Oregon takes great pride in their dreadful uniforms.
In addition to football we feasted on a wonderful brisket from Black's Barbecue, Katie's excellent chili, and s'mores by the bonfire after a refreshing walk around the neighborhood. Somehow we never got around to Nancy's banana pudding, but somehow I doubt that will be wasted. Shana took some home and Matt will claim most of the rest.
Posted by Unknown at 5:50 PM