Not the Worst Restaurant on Earth 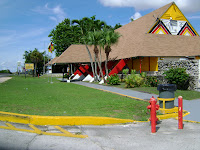 Over the years Shana and I have often driven across the segment of the Tamiami Trail from Naples to Miami and always noticed the Miccosukee Restaurant that was one of the few places where a person could get a meal. On one trip several years ago we stopped to see what it was like. It was not the best experience. The daily special sounded good, but was "sold out" unless you happened to be a local, several of which were served after we were told it was not available. We waited for a rather long time to be served deadly red hot dogs by a surly waitress while 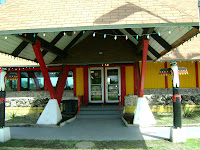 being eyed with suspicion by the other customers. We had joked about it so often in subsequent years that I insisted on driving to Miami by way of the Tamiami Trail in order to get a picture of it so I could feature the Worst Restaurant on Earth in a post. Well, the joke's on me, because the Miccosukee have decided to improve the place all out of recognition. 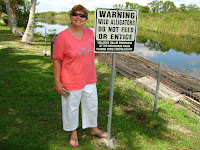 On the outside it is much improved, being painted up in tribal colors, and features a nice information center next door. On the inside we found a nice clean facility with hospitable staff. We sampled the sofkee, which is a typical tribal food (and a common food among many other tribes as well). It's basically a gruel made of corn, or sometimes other grains. We also enjoyed a delicious cafe cubano. Afterwards we slipped outside to look for alligators, then we got back on the road for Miami.
Posted by Unknown at 9:06 AM