This has been a busy and fun weekend. Shana and I went to see the new Harry Potter film, which we both enjoyed very much. As always the sets were wonderful and the special effects suitably magical. Of the series, I would say this was the weakest one, sort of like the second LOTR movie (The Two Towers) with Horcruxes. Worth seeing, I thought, and important to advance the plot for the series as a 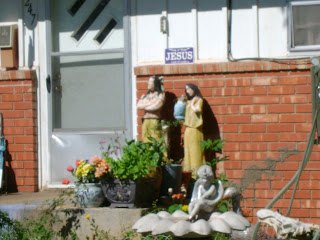 whole, but is possibly not a good stand-alone feature. Having seen all the movies and read all the books I may not be the best judge, and I'm not at all sorry I went to see it, especially when Shana had a pass so we were effectively getting in for half price. I was stunned almost speechless by the prices at the concession stand, though. We saw the movie at the mall, and stopped to do a little bra shopping for Aunt Rita on our way out. We stopped by to see if the bras were a good fit (they were. at last success in this area) and went on for a ride around Lake Overholser. We finished up the day with a delicious Mexican meal at Los Amigos, a trip to the grocery store and went home to do our prep work for a hot dog lunch with friends after our planned Sunday ride. 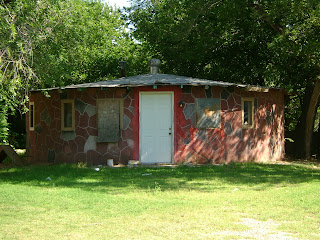 We met up Sunday early in the morning with friends to enjoy the day. We split into two groups with one group riding around the lake and the other riding to El Reno. It's an easy and convenient 40 mile round trip that has become our go-to weekend ride. Sunday is a nice day to ride out because there is even less traffic than usual. Since we are not so occupied with watching out for traffic we are free to look around us more than usual. We passed a group on horseback having a spot of trouble on the road. A house caught my eye on the way into town with some unique lawn decor. What appeared to be a Native American couple stood on the porch behind a group of flower pots and under a sign mentioning Jesus. The couple was watching a fairy take a bath in the birdbath. Even more items were featured on the porch, but I didn't like to stop too long staring at the house. I only took one picture, and a poor one it was. I suspect I would have had a better picture had I taken it on the way into town when the light was not quite so harsh. Ah well. I'm no photographer, just an observer of the the absurd. Next time I'll get a better one. Having stopped there I looked around before taking off and saw a round rock house I had never noticed before. I'm sure there is a story behind it; one day I'll find out more. 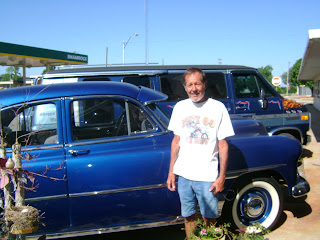 I've had occasion to visit with a resident with a store across the street from the Shamrock gas station where we always stop. He has a beautifully restored car that gets a detailed washing every week. 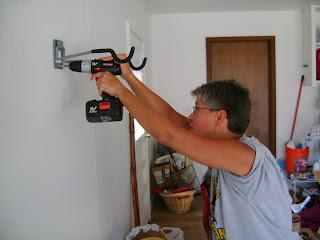 We enjoyed our hot dog lunch with most of the friends who rode and several more who were not riding but were able to come by for a visit. Shana was finished with her ride before I was, so she picked Aunt Rita up so she could come over for lunch and visit with our friends. It was so much fun to visit, and we firmed up some of our plans for the upcoming Hotter n' Hell festivities. Before heading home Diane B was kind enough to not only build a bike rack to fit inside my car but also put up the hangers to get Shana's bikes hung in the garage.
There are more pictures of this weekend's adventures in my Flickr Gallery, and also recent pictures there from last weekend's visit with Miss Vivian and the kids.
Posted by Unknown at 6:43 PM