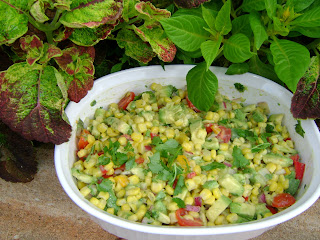 Shana got in late last night - didn't matter when because the fireworks display we had planned to attend was cancelled due to storm. We had a massive thunder & lightning event which not only cancelled several local events but made my burger grilling a team sport. Sharon Jean held the umbrella while I tended to the burgers. If I do say so myself (and I do) they were very good indeed. This morning I made Paula Deen's avocado and corn salad with slight changes to the thanks of a grateful nation. Maybe not the actual nation, but it was very well received at the church potluck. It will definitely join my repertoire as it has all the best features of a potluck dish: NO COOKING, no mayonnaise so it can sit at room temps without poisoning anyone, good looking, and inexpensive. 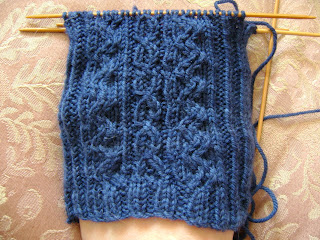 Before I left for church this morning I was watching Stage 2 of The Tour de France, but had to leave just minutes before the end of the stage. I therefore missed the exciting sprint to the finish. I came home after services and potluck lunch and settled into my study/craft room to work on the Canal du Midi sock in progress while watching the rebroadcast of the stage. It was so relaxing that I fell asleep just minutes before the end of the stage. Doomed, I'd say. I did see the last few seconds in the replays at the end of the program but DANG. Missed it twice! I've had this book for a while and always intended to make this sock. I did begin the first sock twice, but only because after a couple of inches I could see that I needed to go to a smaller needle. I am continuing the ribbing across the back of the sock down to the heel as I think this will provide a better fit and a slightly better look. That mysterious lump in the photo is my toe, not some defect in the sock!
Posted by Unknown at 5:13 PM

I love those socks you are making. And have to book. Yes, it's time for another sock, with three on the needles there will be no excuse for not finishing one. It would be needle juggling time. Lovely socks!

Also, I am interested in your salad as it sounds delicious!

Have you ever had corn and la sueur pea salad? I'll put a recipe a rockhound buddy made up for the one she always used to bring. It's sweet and sour.