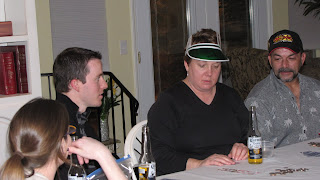 This weekend has seen lots of activity. Saturday night Shana and I attended a Shounapalooza Poker Night. FD hosted it over at Flamingo, which was the first time I saw the house since we moved out. It looks nice, but it was kind of startling, because once again it looks completely different. The Humphreys kids came up from Dallas to attend, and we had a great potluck. It was all country dishes, and Shana pointed out on the way home that every dish except desert featured pork. I think everyone had a good time, and I would not be surprised to see a repetition of the event in the future. Next time we will have a Euchre table, as some of us are really bad poker players - especially me. I didn't even try to play. Instead I drove everyone mad taking pictures (as usual). 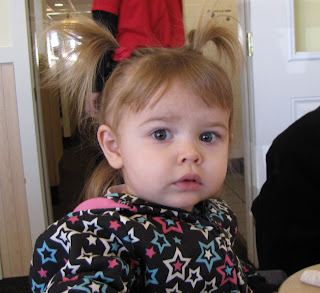 Sunday was Samantha's birthday. We decided on a Sunday Brunch at the local IHop with her dad, since she was already planning to have brunch with him to celebrate their birthdays. Alex surprised her by coming with Jamie and Vivian. Sam thought he was blowing off her birthday until she walked in and saw Vivian. It was all-you-can-eat pancakes with our entrees. The restaurant was busy enough that our waitress took a really long time to get our food to us, but not so busy that we could not sit for two hours visiting. Since we were planning to hang out for a while anyway we didn't mind much that it took a long time for her to get tous. Everyone was ready to pop by the time we left, and I took half of my giant omelet home to have for lunch tomorrow. We had a very good time and a good visit. I think the Birthday Girl enjoyed her party.

On the way home I stopped at the beauty supply to pick up a new Yellowbird hair dryer. Shana and I each had one, but both have died and the last month has seen us very dissatisfied and using an inferior dryer. The Yellowbird is ugly and loud, with an obnoxious color and an old-school appearance like a relic from the 70's but it's the fastest and most powerful dryer I have ever had. It was so worth the special trip to pick one up. 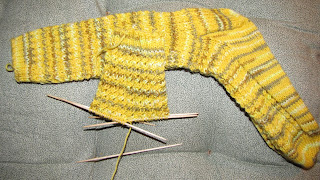 I've got two pair of socks on the needles. One is a pair of yellow eyelet rib socks that are more than half finished, and the other is another pair of monkey socks past the heel on the first sock. I think that this afternoon will see me holed up in my craft room relaxing by knitting and watching movies. Alternatively, I have a beginner's book on digital photography to read with an accompanying DVD for the conceptually impaired. Now that I have a pretty good camera it's probably time to get a handle on taking better pictures. I can already tell the difference in the quality of my pictures even though I am definitely not getting the best from the camera.
As always, more pictures are loaded up on my Flickr Gallery. Follow the link on my sidebar.