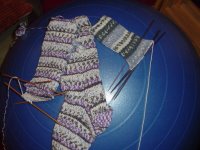 The work week is nearly over and it looks like I'll live to tell the tale.

Crafty goodness in progress includes purple striped Sockotta socks which will be taking off for Alaska to warm up some cold toes as soon as they are finished, and ribbed blue and white Simple Stripes. The blue socks were my campfire knitting last weekend. I'm going to teach one of my camping/biking friends to knit as soon as we both have a bit of time available. Then I won't be the only one passing the time with my pointy sticks. She's thinking Christmas scarves, which will be great fun. 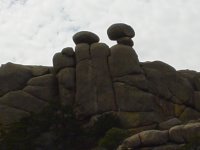 Last weekend we camped again at the Wichita Wildlife Refuge. I went down Friday night, and Shana joined us Saturday morning. I took a bike, and had time to go for a ride before anyone else got to the campsite. Friday night was cold, but Saturday was perfect. We had a combination of hiking, biking, and fishing planned, but somehow on the way to get fishing licenses we got sidetracked and visited a couple of the local towns. Medicine Park was having an arts festival, so we drove over to take a look. The town is very cute, with a local cobblestone building style that is unique. Medicine Park was a spa in days gone by, and reportedly a hideout of Bonnie and Clyde. Wikipedia has a nice article about the town HERE . Also, here's a picture I saw at several different sites. This style of cottage is still very much in evidence there, many converted into rental cottages of B&B's.

The arts festival consisted of two prints and one pot - an exaggeration, but not by much. There was an iron worker whose wares one of our party had admired at other events, and took advantage of the occasion to buy a piece or two. There was a beer stand, where we each got a can of beer. The little park along the river said "no alcohol", so we sat down on the wall outside the park to enjoy the view and the beer. The local police came to shoo us along (not too nicely). By the time we walked back across the street to the beer stand where one was allowed to imbibe, another cruiser had come along to be sure no reinforcements would be needed to handle 4 women with 3 cans of 3.2% beer. The food stand was offering the odd selection of ribs and chop suey - and not very friendly at that. We drove down the road to Meers for a burger.

Meers, Oklahoma is the home of the Meers Store and Restaurant . They serve delicious longhorn burgers, home made pie, and also host the Meers Geological Observatory. The Meers fault is thought to be capable of producing a 7 point earthquake in the future, although the last movement was quite a long time ago. If you click on the link to the Meers Store and Restaurant you'll see a very nice article about the seismograph and the fault. Meers also provided us with an evenings entertainment in the form of saying MEEEEERS - sounds like a cat meow! Meers also host a bicycle tour called Tour De Meers in the spring - one I am unlikely to try because it is intensely hilly and would probably kill me dead. I dare not dwell on it for fear I'll be tempted...

We went back to the campsite to cook steaks and tell jokes. The campfire gathering broke up about 10:30 pm, which was not a moment too soon. It started to sprinkle, then it started to pour, and then it poured down rain all night and most of the next day. Some of us went into Cache for breakfast, others were put off by my description of our destination as "The Nasty Diner". It is, but the food was very good. It shares a building with a junk store that boggles the mind by its sheer lack of organization. You might find a loaf of bread or a fishing pole or a bucket of old golf balls just anywhere. We dawdled along in there, in no hurry to head back to camp because it's not so much fun to break camp in the mud and the rain. I still need to set my tent up in the driveway to wash the mud off.

Tomorrow is Blood Drive day at work - I'll find out whether my efforts have resulted in lowered cholesterol. Also haircut day for me - and not a moment too soon!